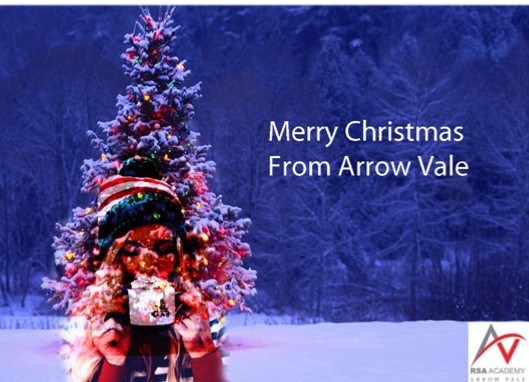 Over the course of the year Arrow Vale has been getting students to participate in competitions ran by the Creative Arts Department.  The last competition that was launched was to design a Christmas card which would become the official School’s card.  Rather than it being encapsulated to one creative subject like art or photography, the Art Department decided they would open it up to both. Even though it sounds like only people that take art or photography could have entered, they were open to the whole school. After seeing some of the entries, I can say that all of the entries, whether they were handmade or photographed, were up to an amazing standard and it really showed how creative the whole school was, and  Mr Mellor, the Principal had really hard choosing the winner.

As a photography student, we got given time in two lessons to create our own entries for this competition. This was a really great opportunity because it helped enable our skills on Photoshop, which we will need for further projects. We got tasked to open up a Photoshop page and find a Christmas image off the internet, put it on the page and then you could either add a filter or some layers to create your own creative flare to the image. A lot of pupils went through a great amount of effort to make this their own and truly show the amount of techniques we as a group have discovered in our introduction to Photoshop.

From the start, when Mr Field told us that we would be creating Christmas cards I knew that I wanted to try my hand at a double exposure technique that I personally think looks beautiful. What I did first was find two images off the internet, one that had an area of negative space and the other of a girl that was in the Christmas spirit, wearing an elf hat and drinking a hot chocolate. From there, I positioned the girl over top of the Christmas tree that would be in the background of my Christmas card. Then I played around with a filter on the girl to try and find one that would make the transition from the background to foreground smoother. Then I got an eraser tool that faded at the edges and started to go around the edges of this girl so the background for that image disappeared and you just had the girl, almost appearing from this Christmas tree, like an apparition for the festive spirit. Then I wrote a banner on the page to wish everyone a very merry Christmas.