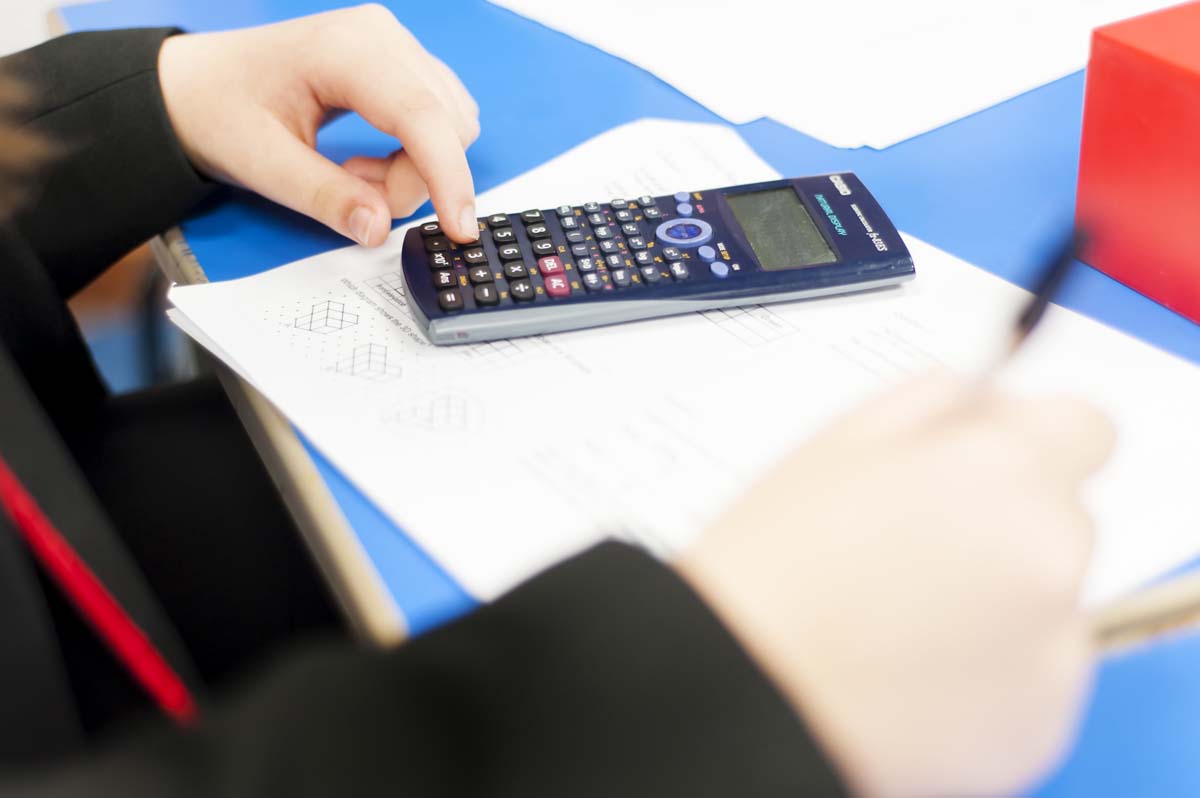 “The chief forms of beauty are order and symmetry and definiteness, which the mathematical sciences demonstrate in a special degree.” – Aristotle

Lessons are enjoyable and motivate students to enrich their minds and pupils are encouraged to achieve their full potential. Standards of teaching are good or outstanding.

We currently offer a successful A-level programme where Further Mathematics is also an option for pupils to take, each year the number of pupils choosing AS-level mathematics increases.

The school is making strides in many areas as we work to provide excellent educational experiences for all pupils in our care to inspire individuals for their future.

Throughout Year 9, students have five lessons a week of core maths, covering all topics in algebra, number, data, shape, space and measure. Students are continually assessed in each area and work towards a final end of year assessment.

During their lessons, a focus on using and applying mathematical skills and developing problem solving. The students work on the new (9-1) GCSE syllabus which offers a challenging, but enjoyable range of topics preparing them for their exams in year 11.

These engaging lessons will allow students to develop essential skills using maths in real life contexts not only for the GCSE course but also for use outside the classroom in everyday life.

During year 10 the foundation skills for the GCSE qualification are taught. The depth of understanding depends on the needs of each individual pupil. GCSE mathematics is split into 6 units: number; algebra; geometry and measures; ratio, proportion and rates of change; probability and statistics all of which have an importance in mathematics.

Pupils will study mathematics for 5 lessons during a week in a classroom environment and are expected to study outside of class to ensure that they achieve the best possible grade. The course will be internally assessed by examinations taking place at the end of year 10 and this will prepare them for their final assessment sat the end of year 11: Depending on pupils ability they will either take the foundation or higher tier.

Homework for the course is given electronically and it is the pupils’ responsibility to ensure that this is completed on a weekly basis. We increase the number of classes in year 11 so that focussed teaching with smaller groups can occur.

During the 2 years studying A-Level there are 3 papers to complete that are all sat in year 13. In year 12, Core mathematics needs to be completed for the AS qualification and in year 13 these are extended for the A-level. The third paper focusses on statistics and mechanics.

Pupils also have the opportunity to take Further Mathematics as an extra qualification, which Universities value for mathematics related degrees. This course is for able mathematicians that would like to study mathematics beyond A-levels. This will be done outside of lessons and all pupils that have studied this have been very successful and gained excellent qualifications in mathematics.

Pupils have the opportunity to compete in the maths challenges that take place nationally against other schools. They will gain a gold, silver or bronze medal if they are successful. Over 100,000 pupils nationally take part each year and we have pupils that have achieved these medals in our school.

We work closely with Warwick University and often take trips there to see enrichment activities. Last year pupils were so enthused by this that over half of the pupils that attended have now taken AS Mathematics.

Undergraduates at Birmingham University will be working closely with the School this year to enrich pupils and improve their understanding of mathematics.

Through various projects, mini investigations and activities built into lessons, SMSC, (Spiritual, Moral, Social and Cultural) is being delivered in high quality lessons.

All maths lessons have team seating, developing the social aspect of SMSC.

Projects outside of a classroom consist of:

Developing deep thinking and questioning the way in which the world works promotes the spiritual growth of students. In Maths lessons pupils are always encouraged to delve deeper into their understanding of Mathematics and how it relates to the world around them. The skills of analysing data are taught from Year 9 to Year 11 to enable students to make sense of vast amounts of data available in the modern world around them. Sixth Form students are able to extend this knowledge through the study of Statistics. Sequences, patterns, measures and ultimately the entire study of Mathematics was created to make more sense of the world around us and we enable each of our students to use Maths as a tool to explore it more fully.

Examples of Spiritual lessons in maths:

The moral development of pupils is an important thread running through the entire mathematics syllabus. In Year 9 students spend an hour a week on various projects when pupils to use Maths in real life contexts, applying and exploring the skills required to solve various problems. Projects include designing an emergency shelter to protect people who have lost their homes due to natural disasters and applying their data analysis skills in a real-life context during projects focussing on the conservation of the rainforest and saving baby kangaroos.

Examples of Moral lessons in maths:

Problem solving skills and teamwork are fundamental to Mathematics, through creative thinking, discussion, explaining and presenting ideas. Students are always encouraged to develop their Mathematical reasoning skills, communicating with others and explaining concepts to each other. Self and peer reviewing are very important to enable pupils to have an accurate grasp of where they are and how they need to improve. Working together in pairs or groups and supporting others is a key part of Maths lessons.

Examples of Social lessons in maths:

Mathematics is a universal language with a myriad of cultural inputs throughout the ages. At Arrow Vale we encourage the teaching of various approaches to Mathematics including the Chinese lattice method for multiplication. We also explore the Mathematics applied in different cultures such as Rangoli patterns, symmetry, tessellations and Islamic geometric patterns. The ability to use exchange rates for foreign travel are also important life skills students will learn.

Examples of Cultural lessons in maths: