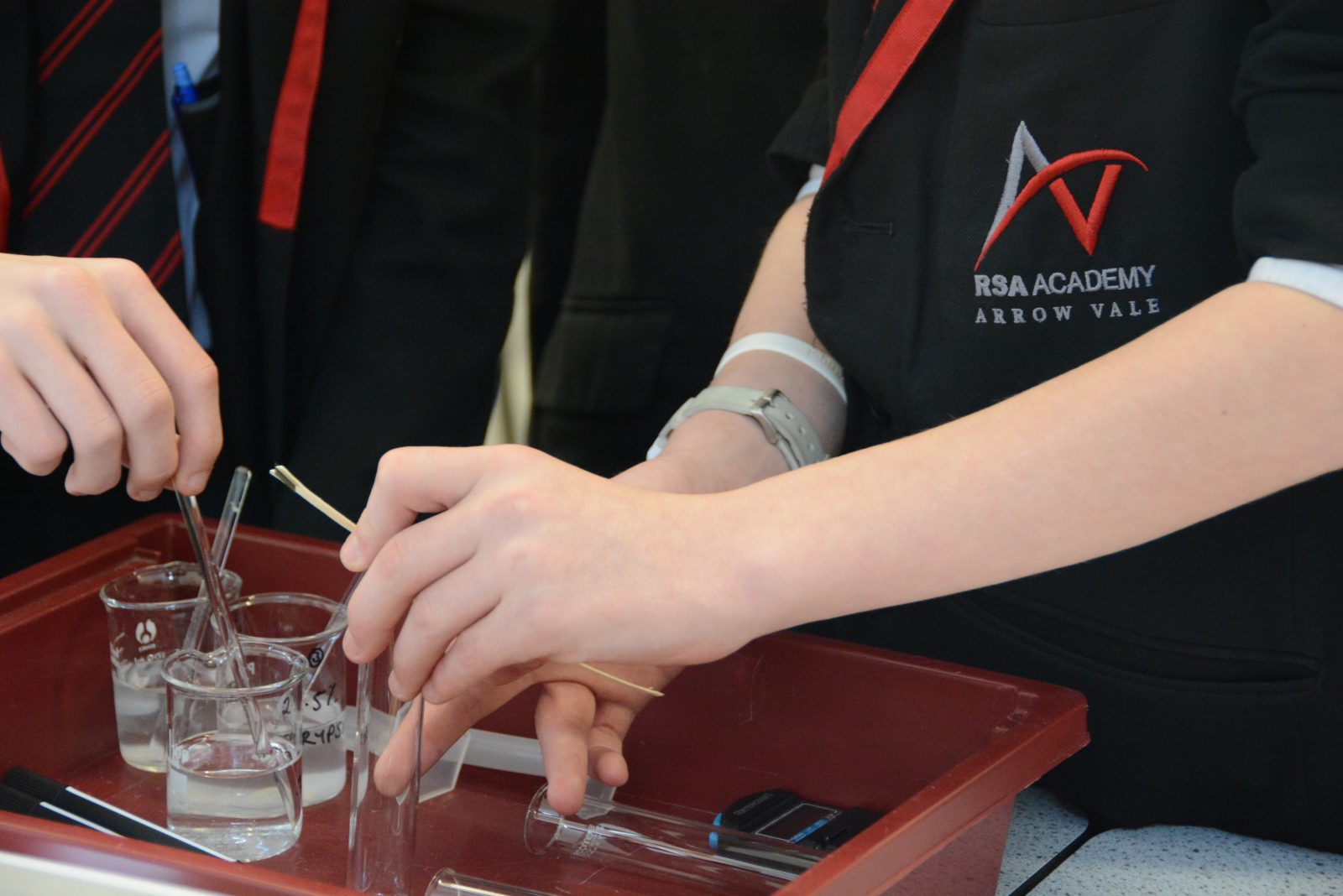 “Science is a way of thinking much more than it is a body of knowledge.” – Carl Sagan

The Science Department are a strong and enthusiastic team of 8 teachers who work closely, sharing ideas and resources ensuring we continually develop our ideas, introducing new and innovative strategies to the classroom. The teaching staff is supported by 2 excellent technicians.

The department offers a wide-ranging programme of study built around the central belief that science is a relevant and necessary part of life, taking students from general science in year 9 through to a full complement of the sciences in Sixth form.

We believe that science is interesting at Arrow Vale because:

We aim to develop both practical and critical thinking skills, ensuring that students become fully scientifically literate, hopefully producing future generations of scientists with an ability to critically appraise new information and theories.

Students in year 9 start working on a bespoke curriculum, designed and written specifically for Arrow Vale students. Pupils will study a variety of topics that are aimed to develop both their knowledge but also gain confidence in planning, completing and analysing practical experiments.

The curriculum is designed to give both depth and breadth to the skills necessary to become a scientist.

The year 9 curriculum is taught through 9 modules with a focus on engagement, fun and practical skills:

The study of biology leads pupils from the individual structure of a cell through to organ systems and organisms, properties of plants and animals that enable respiration. Factors that affect photosynthesis is covered. Pupils then consider what brings variation to the species that surround them. The programme of study introduces microorganisms, their uses and potential dangers and how to live a healthy lifestyle.

Chemistry introduces the relationship between atomic structure and chemical properties, how we extract metals from rocks, factors that affect rates of reaction and the fundamentals of chemical reactions.

Pupils will study magnetism and electromagnets, including factors that affect their strength. Forces and how they interact with objects before then progressing to study waves, the transfer of energy and the electromagnetic spectrum.

All students will follow the AQA GCSE Science specification leading to either 2 or 3 GCSE qualifications according to their route.

Double science: Students shall complete the AQA Trilogy Science. This consists of 6 exams and required practicals that allow the students to access the “How Science Works” marks that are available in the exams. Each student shall leave with 2 GCSE Science qualifications.

Separate Science: Students shall complete the AQA course in Biology, Chemistry and Physics. Each course is examined by 3 exams. Each exam contains content relevant marks and “How Science Works” marks that require students to draw upon their experience in the required practicals.

Arrow Vale’s Science department offer a wide-ranging curriculum to ensure students who wish to pursue their interest further are able to. Embedded in the curriculum for all sciences is the opportunity to develop the skills, knowledge and understanding of how science is prevalent in society.

Biology is a popular A level that aims to develop students’ enthusiasm, encouraging them to further study and careers in science. Students follow the AQA A level Biology specification.

A level Chemistry aims to hone the skills and develop the understanding of students, deepening their understanding of the atomic and subatomic interactions that create the world around us. Students follow the AQA Chemistry specification.

Physics aims to develop students’ enthusiasm, encouraging them to further study and careers in science by developing their understanding of forces and subatomic particles. Students follow the OCR A level Physics specification.

Students undertake the level 3 BTEC which does not include any exams. It aims to develop practical skills and application of knowledge through creating a work-based scenario. Biology, Chemistry and Physics are studied before having exams in them. Students also complete a practical unit and two assignment units before completion.

The department offers many enrichment opportunities to enrich and develop each student’s experience of science. We offer trips throughout the year and engage the whole school in National Science and Engineering Week.

Through the effective use of the TEEP teaching and learning cycle and the explicit use of KASE to develop student’s personal learning skills, science offers a wide variety of SMSC opportunities.

Sometimes science and spiritual ideas do cause conflict but in a modern society it is important to understand why these conflicts arise so we can respect the views of others and move forward.

It is also seen more often that science can stand alongside the spiritual beliefs of many. This is looked at often from a neutral standpoint within science lessons.

EXPLORING THE VALUES AND BELIEFS OF OTHERS

USING IMAGINATION AND CREATIVITY IN LEARNING.

Our understanding of Science has allowed us to develop technology we couldn’t have imagined 50 years ago. Now however, we must start deciding if we should we do all the scientific activities we are able to or morally should we decide not to. This can be as simple as should we test medicines for humans that could save lives on animals causing them cruelty. It could be as complex as should we allow somatic or germ line cell therapy. Moral development is a vital part of any scientist’s development. Students will need to develop a good understanding of it to firstly pass exams which always comprise of ethical questions but more importantly to become a good rounded scientist.

RECOGNISING RIGHT FROM WRONG AND APPLYING IT:

UNDERSTANDING THE CONSEQUENCES OF THEIR ACTIONS

Science is changing our society. The life expectancy is getting larger, people are driving more efficient cars, more and more people are putting solar panels on their rooftops. Our society has become dependent on scientific developments which we could not have foreseen 50 years ago but also our lives are likely to change significantly in the future because of our reckless damaging activities to the environment as a human society. Students must consider their impact on the world around them and start to look at what we can do to help the next generation have a habitable planet.

UNDERSTANDING HOW COMMUNITIES AND SOCIETIES FUNCTION

Scientific development comes from all across the world, from people of all backgrounds and cultures. Some of science’s most important discoveries have come from other parts of the world and it’s important for students to understand this as many believe that progress comes largely from the UK or America. It is also important to understand how the different cultures around the world different impacts on the planet and what impact more economically developed countries can have have on poorer areas. This will also be vital into the future as we need to monitor the impact of quickly developing cultures around the world on our environment.

PARTICIPATING IN AND RESPONDING TO CULTURAL ACTIVITIES

Celebrating the role scientists have played in our society. For example, the influence of: