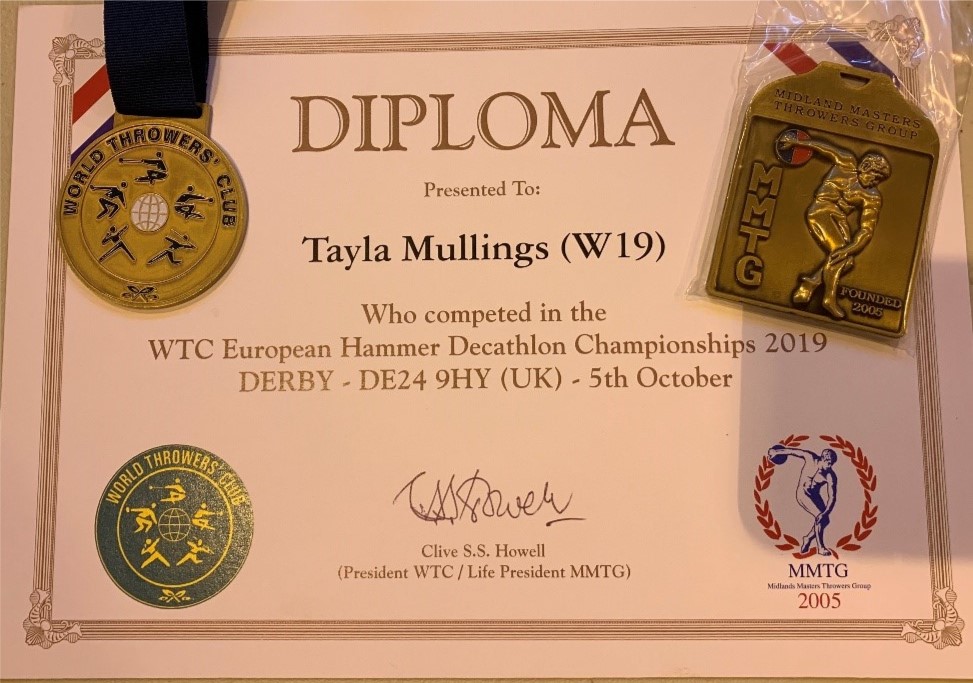 On the 5th October 2019, I competed in a European Hammer Decathlon Championship held by the World Throws Club in Derby.  I had previously competed in this competition in 2017 however I placed 2nd place with only a couple of points away from 1st, so coming into this year I was determined to earn more points and place 1st.  This year there were a lot more athletes competing. We were split into two groups so when group A had finished, group B would follow.

Going into this year’s competition I was the youngest female athlete competing with the next female being 9 years older than me, which made me even more determined to be throwing my best and to show people what I was capable of.

The competition was an all-day event starting at 8:30am and finishing around 4pm. The day was set out so that each competitor threw each hammer and weight three times.  The furthest throw measured, determined the amount of points you earned.  All the points were then added up to give you a total at the end of the day.

The Hammer Decathlon consisted of throwing five different weighted hammers, in the morning, which include; 2kg, 2.5kg, 3kg, 3.5kg and 4kg, we had three attempts at each weight with the furthest throw being measured and recorded.

I successfully managed to further each weight from the previous year I competed, which allowed me to pick up more points going into the afternoon competition. In the afternoon we moved on to throwing the Weight Throw. This is a shortened version of a hammer and much more technical to throw. Again, we had three attempts at each weight, the weights in this section of the competition included; 5kg, 7.5kg, 9.08kg, 10kg and 12.4kg.

Strangely enough my throws got better and further as the weight got heavier. Once we had finished throwing all the weights, we then headed inside to warm up and have something to eat. This was when all the points were added up and we are awarded our medals and diploma certificate to say that we had competed in an European competition. I managed to achieve a final total of over 3800 points which placed me first, achieving a gold medal and resulting in me being European Champion 2019. A great end to a successful day and 2019 season.