The mission of the RSA (Royal Society for the encouragement of Arts, Manufactures and Commerce) is to enrich society through ideas and action. They believe that ‘all human beings have creative capacities that, when understood and supported, can be mobilised to deliver a 21st century enlightenment’. Every year the RSA invite students from across the RSA academies, to come to the RSA building in central London, in order to ‘take over’ the building for a day. This year’s RSA Takeover Day was another great success, with students from different schools across the RSA Academies, turning up to take part. This year it was the turn of the community committee at RSA Academy Arrow Vale. They wanted to pitch their idea for a ‘tranquillity garden’ to the RSA dragons, in order to try to win the top prize of £250, to help their cause. Libby Laishley, head of the community committee lead the team, also consisting of Luke Sealey, Miriam Adam, Michal Okonski, Deborah Adam, Abigail Phillips and Laurie Ratcliffe. The students started the day with a tour of the listed, Georgian RSA building with its high ceilings, bright rooms and atmospheric exposed brick vaults. The history of the RSA was written all over the walls in animations designed by members of the RSA, so students could learn about the creative academy to which they belong. Students then had a chance to take part in workshops, getting to take part in exciting research into new ideas that are being trialled by the RSA. One workshop in particular really captured the imaginations of the students, so much so, that they are looking to see whether they can bring the project back to school and be part of this innovative trial for a brand new idea, being championed by the RSA. Students then had to present their idea for a tranquillity garden, in front of the RSA dragons, as well as the other students and fellows of the RSA. The students did an excellent job of presenting to the audience and managed to portray their idea clearly and show passion for what they are trying to achieve. Their idea is aimed at helping students who may be suffering from mental health issues or stress within school. This area is hugely important to all of us and the idea of having a safe space, to allow students to escape and reflect, in a tranquil area all year round, would be hugely beneficial to the school community. Unfortunately, this year we did not win the top prize, which went to Church Hill Middle School, RSA Academy for their ‘Grandmates’ idea. Congratulations Church Hill! However, that did not take away from the success of the day and I would like to say a massive congratulations to the community committee, we are all very proud of you here at RSA Academy Arrow Vale. 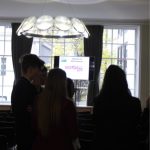 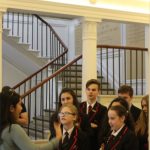